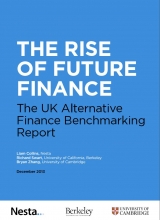 UK based Nesta has publised a report on the “Rise of Future Finance” and covers alternative finance, including P2B UK crowdlending and equity crowdfunding platforms. It is estimated that in 2013 over 647,000 projects were fully funded via alternative finance intermediaries and the report recognizes the disruptive nature of crowdfunding and the growing disintermediation of traditional sources of capital formation. 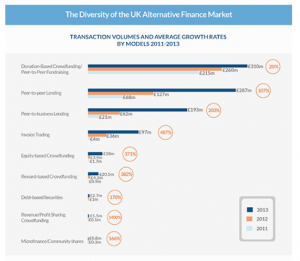 Key findings from the report include:

The 91% growth stated above is an attempt to include all the diverse variants of crowdfunding.

The breakdown of the various crowdfunding categories and amounts raised for 2013 are below;

Previous post:
« How does ECrowd! ensure that my funds are only used for the chosen project: project finance

Next post:
ECrowd! invites you to the new economy »